Which truck was my concrete bridge designed to carry (in Queensland, Australia)?

WHICH TRUCK WAS MY CONCRETE BRIDGE DESIGNED TO CARRY (IN QUEENSLAND, AUSTRALIA)?

Sometimes, the old drawings for a concrete bridge cannot be found. Sometimes, the specific drawing sheet or specification, indicating the design load, has gone missing.

How can you estimate what the original load capacity of the bridge was?

One way is by first work out an approximate age of the bridge: 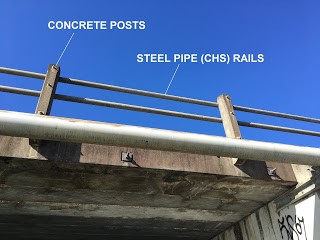 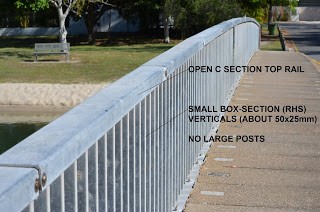 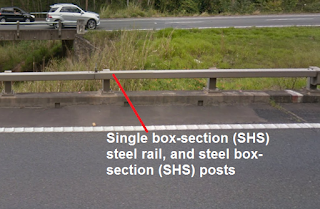 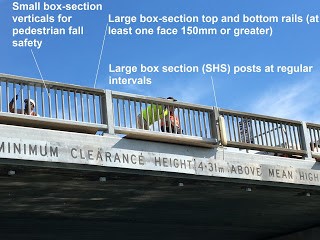 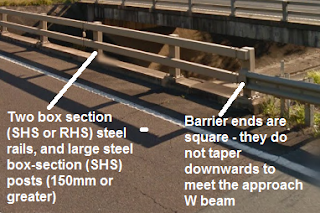 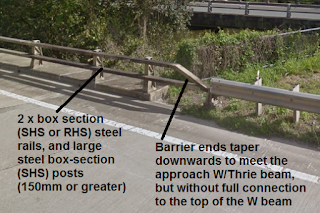 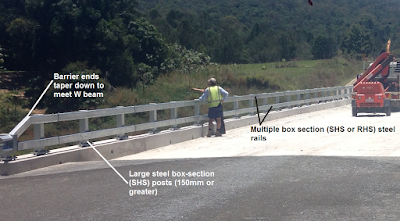 The next step is to find a copy of the Design Code/Standard that was current when the bridge was designed. The following list is not exhaustive, and will be updated as our research proceeds:

For a preliminary estimate of a bridge’s original load capacity, refer the the applicable Design Code (that was in use at the time of the bridge’s design), and find the standard design truck. We have summarised the design truck for each time period, below. Again, the following list is not exhaustive, and will be updated as our research proceeds

Standard design trucks over the decades

The H20-S16 (33 tonnes) was the standard design truck, for main roads and highways, in the 1970 Bridge Design Specification. Smaller trucks were sometimes allowed for on smaller roads

– It is probable that the H20-S16 was the standard load for main roads and highway concrete bridges dating at least from 1955. The US added it as a design load to bridge specifications in that country from 1944. 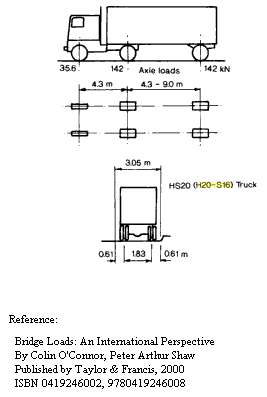 The T44 (44 tonne semi-trailer) load was introduced with the 1976 NAASRA Bridge Design Specification. The T44 remained as the standard design load for bridges, in the 1992 Austroads Bridge Design Code up until around 2004, when “AS5100.2 2004 Bridge Design – Part 2: Design Loads” was released.

– In addition, an A14 axle load (2 wheels x 7.1 tonnes each) that had to be checked, often gave worse effects that T44 on short spans. This was later changed to a single W7 wheel load (1 wheel x 7.1 tonnes) – but effectively the stresses imposed on the bridge were the same as the A14.

– There were also Heavy Platform Loads (HLP-320 and HLP-400) (320 tonnes and 400 tonnes respectively) that were common additional design loads for TMR bridges, less common but sometimes required for Council bridges. If this isn’t shown on the drawings, it is safer to assume these weren’t allowed for.

– Sometimes, for shorter spans (10m or less, which were common at the time), the stresses induced in a bridge by the earlier H20-S16 truck (33 tonnes) and the replacement T44 (44 tonnes) can be quite similar. But this would need to be checked by someone experienced, on a case by case basis.

The SM1600 load was introduced with “AS5100.2 2004 Bridge Design – Part 2: Design Loads” in 2004. The SM1600 load has remained as the standard design load for bridges until March 2017, when a major revision of the AS5100 was released.
– There was also a W80 axle load (2 wheels x 8.1 tonnes) that had to be checked, which gave worse effects on short spans
– Sometimes bridge owners and authorites also required their bridges to be designed for Heavy Load Platforms (HLP320 and/or HLP400). But if this isn’t shown on the drawings, it is safer to assume these weren’t allowed for.

Stay posted for an update on this one. The new Standard, AS5100-2017 Bridge Design, has just been released

This paper gives readers a method to obtain a preliminary estimate for the original design load capacity of a bridge, when the original drawings are no longer available:

I’d be happy to receive constructive feedback for this article, with the aim of improving its usefulness.

Disclaimer Note: TOD Consulting has prepared this fact sheet in good faith, as general information only. This factsheet should not be used as a substitute for seeking professional engineering advice, for your specific circumstances. March 2017 by Chris Dowding – TOD Consulting Pty Ltd